My love for fashion honestly didn’t come until high school, when I was introduced to Tumblr. The website was pretty popular in 2010, and like any millennial I would pore over memes and repost photos—celeb content, mood board–like images and a little bit of nonsense—just as we do on Twitter these days.. I remember one Tumblr post that motivated me to enter the industry—it was from the 2015 Met Gala. That year the theme was “China: Through the Looking Glass,” and Rihanna showed up in a yellow Guo Pei gown. Yes, that gala. Before the show, Vogue Editor-at-Large Andre Leon Talley was hosting the red carpet and a video of him gushing over Rihanna’s arrival began circulating. “I love a girl from humble beginnings who becomes a big star,” exclaimed the teary-eyed editor. “This is the Black frozen. This is the queen of the night.”

My top Rihanna moment of the decade: Andre Leon Talley commentating RiRi in Guo Pei at the Met Gala 2015. “This is the Queen of the night!” pic.twitter.com/dyOcOoonyX

Talley may have seemed overly emotional in that scene. Because why would someone almost cry at a celebrity arriving to the Met Gala? Is it really that serious? At the time, Black women were just starting to be seen at the event in numbers. Rihanna’s look at the gala signified more than just a bright yellow dress that took months upon months to create. In that moment she was personifying royalty in front of designers and industry insiders who had counted Black talent out. Over the past few years, the drive for inclusivity—from a push for more models of color to a move to add plus-size options—has continued. Although progress has been made, it’s important to question if it’s for true change or it it’s for money and shock value. “I never separated from my Blackness,” Andre Leon Talley tells ESSENCE. “My Blackness is what made me.”

To be honest, I’ve never really known Talley to talk about his Blackness. When he was twirling in Europe at fashion shows, Rodney King was being beaten by White cops. While Talley’s words about Black struggle may not have reached the masses, his photos with Karl Lagerfeld and Anna Wintour did. So, in 2020, when I heard that Talley was writing his second memoir, The Chiffon Trenches, which intimately details his experience in the industry, I wondered if the fashion giant would speak about race. “I can only write this book based on who I am and where I came from, this very humble beginning in a tobacco town of Durham, North Carolina,” he said. In his first book, ALT: A Memoir, he details his relationship with Diana Vreeland (a former Vogue EIC) and his journey, or—as the book’s description reads—“how a six-foot-seven African-American man from North Carolina became the influential fashion figure he is today,…[a man] who has survived thirty years in the ‘chiffon trenches’ with eminent grace and style.” In 2003, when this book was released, Talley was a contributing editor at Vogue and other high-fashion magazines. Contractually, he couldn’t say much yet, but if you read between the lines, him calling the industry the “chiffon trenches” was telling.

“My Blackness is what made me.” – Andre Leon Talley 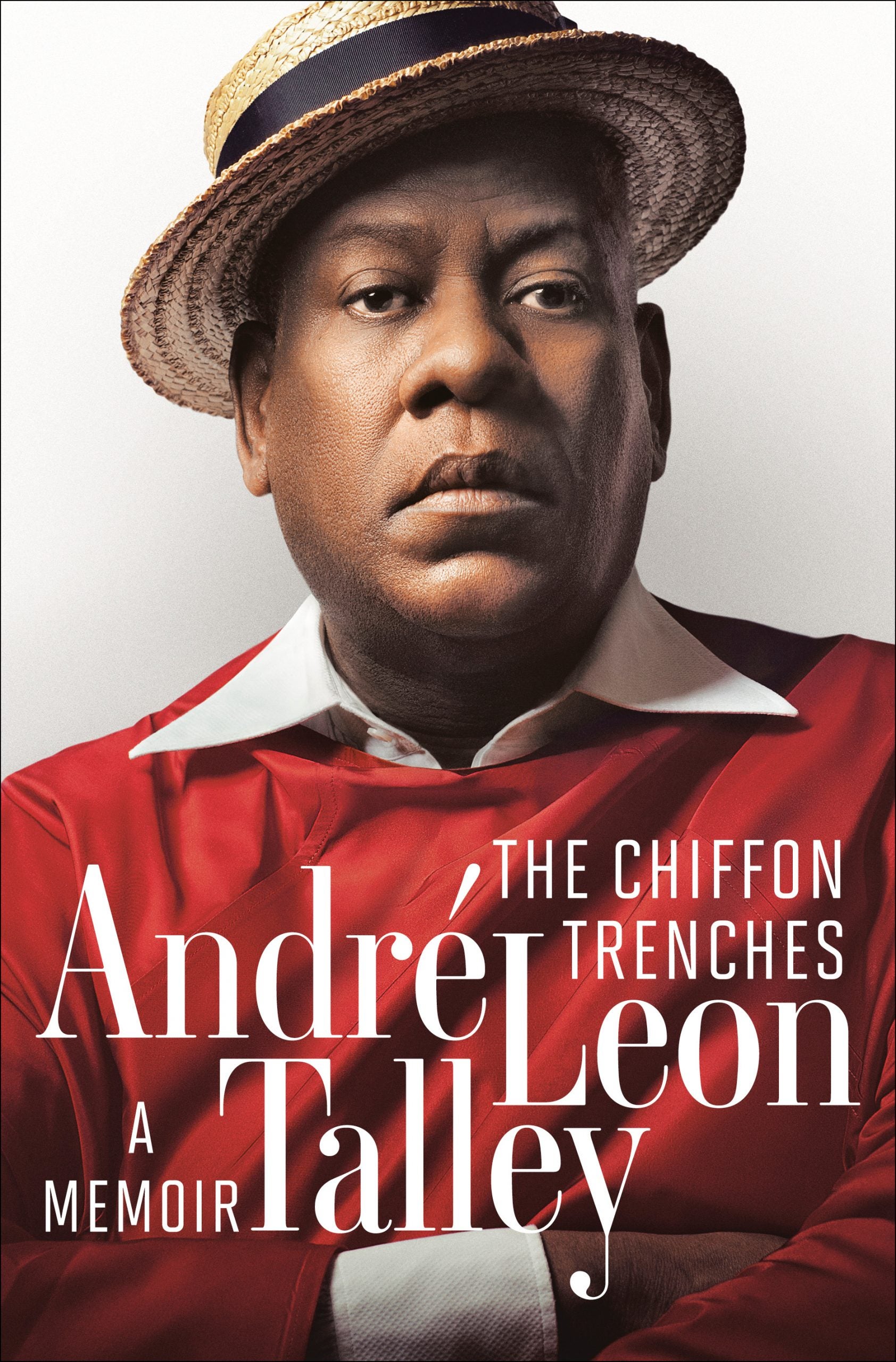 “Editors, I’ve worked with for decades didn’t understand the immense importance of this occasion simply because they are not capable of understanding. None of my contemporaries saw the world through Black eyes,” Talley writes in his new memoir, The Chiffon Trenches. “That is partly what made me decide to write this book and tell my story.” In 2018 Beyoncé graced the cover of Vogue. The singer was photographed by Tyler Mitchell, the first African-American to shoot a Vogue cover. After Talley wrote an op-ed about the piece in the Washington Post, he shared it with his friends at Vogue. No one answered his e-mail. “Were you surprised?” I ask. “I was disappointed, but I didn’t expect any response,” he says.

If you’re expecting his memoir to be a drama-filled tell-all trashing Vogue editors, don’t. In fact, Talley credits Wintour for “making him the highest-ranking Black man in the history of fashion journalism,” and he details personal moments like Wintour’s wedding and their gift-giving exchanges. He has talked about a few fashion insiders calling him “Queen Kong” and his first boss insinuating that he was “in and out of designers beds,” but that’s about it. In his book, he does give an account of a Chanel fitting in 2019 with Wintour that may have dismantled their friendship, but he doesn’t say much about it the potential fallout except that he didn’t agree with what she was wearing.

Andre Leon Talley is poised and elegant. Yes, he is flamboyant but that’s wrapped around in modesty. And he’s always put together. Perhaps it’s due to his southern upbringing, relationship with the church, and love for his late grandmother. As a woman who was raised in Biloxi, Mississippi, and Houston, I was never granted the opportunity to mess up. I had to be the best in everything I did to be seen, and I imagine that Talley wouldn’t be where he is if he detailed his longevity in the fashion industry only through the lens of race. Why didn’t Talley receive a response about his op-ed celebrating Vogue’s Beyoncé cover and the magazine’s decision to tap Tyler Mitchell to shoot her? Perhaps responding to Talley’s e-mail would’ve forced the powers that be to discuss race relations within high fashion.

There’s no rule book for activism. Granted, the figures for Black movements were loud, strong and seemingly fearless: Think Malcom X, Martin Luther King, Assata Shakur and Angela Davis. MLK, for example, often held silent protests to “speak out” against certain issues. But Black protest doesn’t have to come in the form of open revolt. Activism, which means “a person who campaigns to bring about political or social change,” can arguably include working and excelling in an industry that has never seen a person of color rise through the ranks. Talley has done that. Some say discussing race may prevent you from having a seat at the table. Maybe that is why Talley is who he is. He has always played the part. However In 2020, he’s done with that.

The Chiffon Trenches is out today.

*This story will run in the ESSENCE July/August issue*

The post Andre Leon Talley Is Done Sitting At The Table appeared first on Essence.